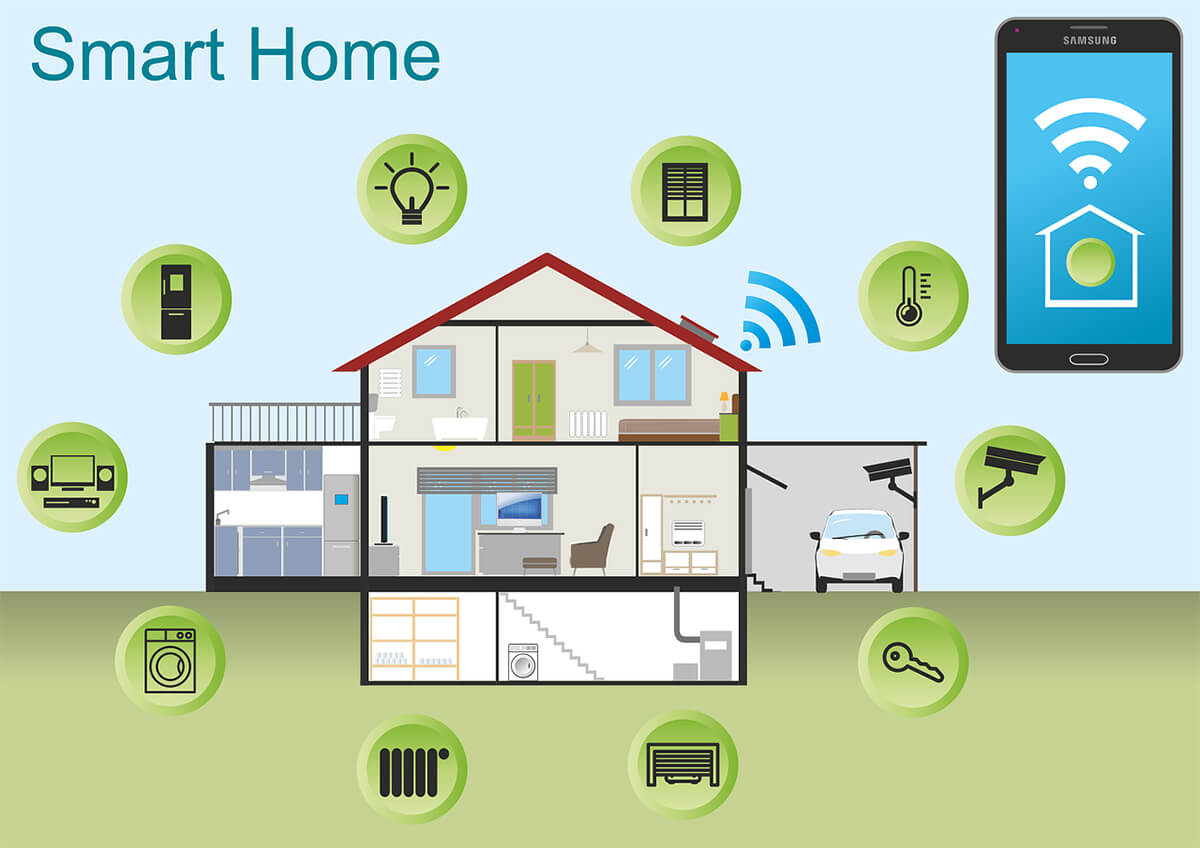 Sounds something like out of this world! Isn’t it? Conversing with your home appliances, adjusting lightings and home temperature per your wish, having the power to control and secure your home from anywhere in the world you want – all this is possible just through your fingertips. It sounds to me like fiction has come alive from the fantasies of the marvel movies! But, It’s real! All this is possible with a home technology called ‘home automation’.

So, what is this home automation? It’s a huge network of smart devices connected to each other and the main computer through internet or WiFi. WiFi connectivity enables monitoring and control of the devices remotely with the applied user interface on smartphones, tablets, laptops, and desktops. It’s as simple as using an app on your smartphone.

In context with the smart cities, home automation gives shape to a smart home which is the key feature of a smart city. The label ‘smart’ is given to a city due to the application of technology in every important area including smart homes.

So, to get the grip over smart homes of the smart cities, explore the tech-rich world of smart homes ahead.

What Constitutes A Smart Home?

A smart home is a web of the internet of things (IoT) configured with automated devices, detectors, sensors, and switches. The sensors and the switches are coupled to a ‘gateway’ from where the user controls every device via user interface interacted with a wall mounted terminal, a computer or a smartphone software.

This technology can be applied to many amenities available in a home which is as follows:

Benefits Of Living In A Smart Home

Living in a smart home is entirely a new experience with a lot of excitement, fun, and relaxation. It takes you away from all the stress and strain you have to put in maintaining the household. There are many advantages which are like:

Feel At Ease With The Smart Security – Smart security allows the user to control and manage the security from outside the house. The user can feel safe and secure while being in any part of the world where the smartphone network is available. For example, the user has the access to lock the doors and windows of the house from outside. This gives the user an ease of mind.

Save On Energy – You are on your way for a holiday. Forgot to turn off the lights? There is nothing to worry about. Because the smart home systems keep a check on every move in the home and are virtually in contact with you. So, all you need to do is command your device to switch off the lights. Furthermore, the smart energy monitoring devices save a lot of electricity and water which ultimately saves you a lot more than expected.

Have Fun With Convenience – You have a track on what’s going on at home. You have the smartphone button in your hands. So, it’s fun and so convenient.

Contribute Towards Making A City Smart – Above all, if you are making your home a smart place to live in, you are partly contributing towards making your city smart. Because a place is identified as smart because of the smart people living in.

Home automation technology has witnessed its inception in 1975. Though there has been an off-and-on move in the engagement of the tech world in creating home technology, a Scotland based company gave rise to a protocol called ‘X10’. Since then this technology is advancing successfully.

X10 is a system that connects every compatible device to each other through an existing electrically wired network. This enables devices to interact with each other. The home appliances and the devices receive a numerical message from the transmitters like the remote controls and keypads. For instance, if you want to turn off the heater in your bedroom, the transmitter will send a number code to the receiver (heater). The message will have three distinct messages: First, the receiver receives a command alert. Second, an identifying unit number is sent to the heater for a specific command. Last, a code is received by the heater which contains the actual command like ‘turn off’. All this happens in a split second.

The X10 system is an old invention and has some drawbacks. The system uses the home electrical wires to transmit messages which become noisy due to the connection of multiple devices. Plus, the electrical wires might meddle with the devices which can result in reception of a misunderstood command by the receiver.

X10 using wired systems is an age old technique. Today, the companies have developed smarter home systems that communicate through radio waves. And these radio waves make the Bluetooth, WiFi, and smartphones operable at the same time.

The most superior radio networks Z-wave and ZigBee for home automation are discussed further.

What Is Z-wave And ZigBee?

The two radio networks are mesh networks that use radio waves to forward the transmission of a particular message in more than one way. This ensures the delivery of the message.

Z-wave figures out the fastest mode of transmission via a Source Routing Algorithm. Z-wave device is set in with a code that is meant for the controller to recognise it, determine its location and link it with the network.

ZigBee, as the name indicates is a mesh network that looks for the best and fastest way to transmit a message in a zigzag manner like the bees. The functioning of ZigBee is based on the standards laid by the Institute of Electrical and Electronics Engineers (IEEE) for domestic or personal wireless networks. And so, the ZigBee platform is open to being used by any company to incorporate ZigBee technology to their devices.

Although wireless networks like Z-wave and ZigBee are easier and pliable, they too have limitations like the X10. Hence, a more advanced and rather better way to communicate with the devices is Insteon.

Insteon is the latest technology which comprises a more flexible option to communicate the messages to the networked devices. Insteon uses both the wireless as well as wired systems to transmit messages. It’s because, if one is not working properly it can rely on the other one. It’s a dual-mesh network that broadcasts the message instead of routing it to the targeted device.

Insteon is by far the latest and the most flexible platform to install it in home automation. It gives a more reliable and compliant platform to make the home network stronger than ever.

Though these devices are titbits of a smart city, they contribute majorly towards making a city smart.

Next, what comes into the picture is the high-tech smart home devices of 2017 which will be discussed in the next blog.

The Introduction of 5G Technology in Market